The cheapest price yet for Blur on Xbox 360, a great driving game similar to the Burnout series of games and the recently released Split Second Velocity. We highlighted the fact the price dropped to £14.00 around a week or so ago and given that Blur was only released back in May 2010 this does seem like a great price. 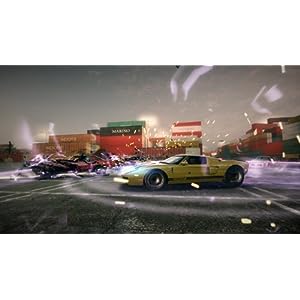 The only criticism of the game is that single player mode is a little long winded and repetitive. Online however is where the game comes into it’s own with plenty of fast paced multiplayer action to keep you entertained. This even kept Modern Warfare 2 out of the 360 for a few days in a row, something which no other game has done in a long time!

Some comments on the game from various user reviews:

This game is so much fun and very addictive! I love the idea of it

I would strongly recommend getting Blur – it is a very worthy addition to any games collection and will keep you entertained for weeks.

If you do happen to come across a better deal or in fact any deal that you feel we should feature on the site then please do get in touch by adding a comment below.  Or why not visit our xbox 360 forum.