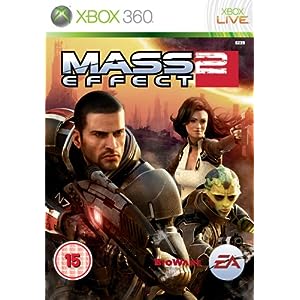 Available for collect in store or home delivery Mass Effect 2 on Xbox 360 is just £9.98 from Currys.

The next best price online is £12.95 so this represents good value for money and a worthy cheap game to add to your Xbox 360 collection.

Back and more action packed than ever is EA’s much anticipated sci-fi sequel Mass Effect 2 for Microsoft Xbox 360. Commander Shepard has returned and he’s on a mission to save mankind all over again – can you handle the challenge?

Two years have passed. A mysterious new enemy has emerged. Shepard must team up with the Cerberus organization and assemble a crack force if he’s to stand any chance of success. Oh yes, and he needs the most powerful ship ever built! Mass Effect 2 features all new combat options with greater weapons choice and control over allies like Samara and Grunt.

The fate of the galaxy hangs in the balance, and only you can help Commander Shepard secure it. Will you be victorious, or will the pressures of Mass Effect 2 prove too much to bear?

If you do happen to come across a better deal or in fact any deal that you feel we should feature on the site then please do get in touch by adding a comment below.  Or why not visit our xbox 360 forum.