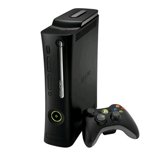 Amazon have done it again and have dropped the price of the Xbox 360 Elite to £179.99 as shown on our cheapest console prices page.

Plus for an Extra £10 you can get two of the following games included making it the best value bundle around at the moment by far. Why? Because most of the games listed below are new or recently released games. Just take a look at the prices, for £10 you are getting £60 worth of games. This puts the price of the Elite in this bundle at less than the Premium/Pro model and not far off the price of the arcade version.

The games available with this bundle are as follows: